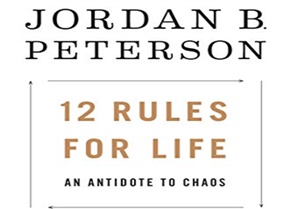 12 Rules for Life: An Antidote to Chaos by Jordan B. Peterson. Discover the synopsis, ratings and reviews, and learn more about this renowned author in the psychology and personal development field.

12 Rules for Life: An Antidote to Chaos by Jordan B. Peterson. Before we talk about the book, let’s say a few words about the author.

Professor of psychology at the University of Toronto and a clinical psychologist, Dr. Jordan B. Peterson was raised and toughened in the frigid wastelands of Northern Alberta.

He has flown a hammer-head roll in a carbon-fiber stuntplane, piloted a mahogany racing sailboat around Alcatraz Island, explored an Arizona meteorite crater with a group of astronauts, built a Native American Long-House on the upper floor of his Toronto home, and been inducted into a Pacific Kwakwaka’wakw family. He’s been a dishwasher, gas jockey, bartender, short-order cook, beekeeper, oil derrick bit re-tipper, plywood mill laborer and railway line worker.

Dr. Peterson has taught mythology to physicians, lawyers, and businessmen; worked with Jim Balsillie, former CEO of Blackberry’s Research in Motion, on Resilient People, Resilient Planet, the report of the UN Secretary General’s High Level Panel on Global Sustainability; helped his clinical clients manage the triumphs and catastrophes of life; served as an advisor to senior partners of major Canadian law firms; penned the forward for the 50th anniversary edition of Aleksandr Solzhenitsyn’s The Gulag Archipelago.

Moreover, he has lectured to more than 250,000 people across North America, Europe and Australia in one of the most-well attended book tours ever mounted; and, for The Founder Institute, identified thousands of promising entrepreneurs, in 60 different countries.

With his students and colleagues, he has published more than a hundred scientific papers, advancing the modern understanding of creativity, competence and personality, while his now-classic book, Maps of Meaning: The Architecture of Belief (released in June 2018 as a now bestselling author-read audiobook) transformed the psychology of religion.

Dr. Jordan B. Peterson was nominated for five consecutive years as one of Ontario’s Best University Lecturers, and is one of only three profs rated as “life changing” in the U of T’s underground student handbook of course ratings.

He lives in Toronto, Ontario. His website is www.jordanbpeterson.com.

Let’s take a closer look now at his multi-million bestseller 12 Rules for Life: An Antidote to Chaos, which was #1 for nonfiction in 2018 in the US, Canada, the UK, Australia, New Zealand, Sweden, the Netherlands, Brazil and Norway, and is now slated for translation into 50 languages, among them French and Spanish.

12 Rules for Life: An Antidote to Chaos, synopsis:

What does everyone in the modern world need to know? Renowned psychologist Jordan B. Peterson’s answer to this most difficult of questions uniquely combines the hard-won truths of ancient tradition with the stunning revelations of cutting-edge scientific research.

Humorous, surprising and informative, Dr. Peterson tells us why skateboarding boys and girls must be left alone, what terrible fate awaits those who criticize too easily, and why you should always pet a cat when you meet one on the street.
What does the nervous system of the lowly lobster have to tell us about standing up straight (with our shoulders back) and about success in life? Why did ancient Egyptians worship the capacity to pay careful attention as the highest of gods? What dreadful paths do people tread when they become resentful, arrogant and vengeful? Dr. Peterson journeys broadly, discussing discipline, freedom, adventure and responsibility, distilling the world’s wisdom into 12 practical and profound rules for life. 12 Rules for Life shatters the modern commonplaces of science, faith and human nature, while transforming and ennobling the mind and spirit of its readers.

“Jordan Peterson, has become one of the best-known Canadians of this generation. In the intellectual category, he’s easily the largest international phenomenon since Marshall McLuhan. . . . By combining knowledge of the past with a full-hearted optimism and a generous attitude toward his readers and listeners, Peterson generates an impressive level of intellectual firepower.” —Robert Fulford, National Post

“Like the best intellectual polymaths, Peterson invites his readers to embark on their own intellectual, spiritual and ideological journeys into the many topics and disciplines he touches on. It’s a counter-intuitive strategy for a population hooked on the instant gratification of ideological conformity and social media ‘likes,’ but if Peterson is right, you have nothing to lose but your own misery.” —Toronto Star

“In a different intellectual league. . . . Peterson can take the most difficult ideas and make them entertaining. This may be why his YouTube videos have had 35 million views. He is fast becoming the closest that academia has to a rock star.” —The Observer

“Grow up and man up is the message from this rock-star psychologist. . . . [A] hardline self-help manual of self-reliance, good behaviour, self-betterment and individualism that probably reflects his childhood in rural Canada in the 1960s. As with all self-help manuals, there’s always a kernel of truth. Formerly a Harvard professor, now at the University of Toronto, Peterson retains that whiff of cowboy philosophy—one essay is a homily on doing one thing every day to improve yourself. Another, on bringing up little children to behave, is excellent…. [Peterson] twirls ideas around like a magician.” —Melanie Reid, The Times

“You don’t have to agree with [Peterson’s politics] to like this book for, once you discard the self-help label, it becomes fascinating. Peterson is brilliant on many subjects. . . . So what we have here is a baggy, aggressive, in-your-face, get-real book that, ultimately, is an attempt to lead us back to what Peterson sees as the true, the beautiful and the good—i.e. God. In the highest possible sense of the term, I suppose it is a self-help book. . . . Either way, it’s a rocky read, but nobody ever said God was easy.” —Bryan Appleyard, The Times

“One of the most eclectic and stimulating public intellectuals at large today, fearless and impassioned.” —The Guardian

“Someone with not only humanity and humour, but serious depth and substance. . . . Peterson has a truly cosmopolitan and omnivorous intellect, but one that recognizes that things need grounding in a home if they are ever going to be meaningfully grasped. . . . As well as being funny, there is a burning sincerity to the man which only the most withered cynic could suspect.” —The Spectator

“Peterson has become a kind of secular prophet who, in an era of lobotomized conformism, thinks out of the box. . . . His message is overwhelmingly vital.” —Melanie Philips, The Times