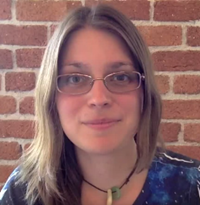 Becky Chambers published A Closed and Common Orbit in 2016, a science fiction novel. It is the stand-alone sequel of The Long Way to a Small, Angry Planet, her debut novel, which was the first self-published novel to be nominated for the 2014 Kitschies for debut. The latter was also awarded the 2016 Baileys Women’s Prize for Fiction. 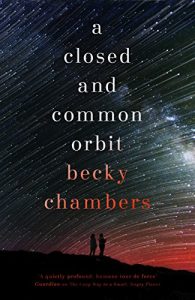 Becky is from California. She was raised in a “space family”, as she says, as the progeny of an astrobiology educator, an aerospace engineer, and an Apollo-era rocket scientist. She has lived in Scotland and Iceland, and currently resides in her home state with her husband.

In addition to writing, Becky has a background in performing arts. She’s worked as a technical writer, a bartender, and a production assistant, among other things.

She also writes nonfiction essays and short stories. She is a devotee of video and tabletop games, and enjoys spending time in nature. She hopes to see Earth from orbit one day.

A Closed and Common Orbit is the stand-alone sequel of her first novel, The Long Way to a Small, Angry Planet, originally funded via Kickstarter in 2012.

Embark on an exciting, adventurous, and dangerous journey through the galaxy with the motley crew of the spaceship Wayfarer in this fun and heart-warming space opera—the sequel to the acclaimed The Long Way to a Small, Angry Planet.

Lovelace was once merely a ship’s artificial intelligence. When she wakes up in a new body, following a total system shut-down and reboot, she has no memory of what came before. As Lovelace learns to negotiate the universe and discover who she is, she makes friends with Pepper, an excitable engineer, who’s determined to help her learn and grow.

Together, Pepper and Lovey will discover that no matter how vast space is, two people can fill it together.

The Long Way to a Small, Angry Planet introduced readers to the incredible world of Rosemary Harper, a young woman with a restless soul and secrets to keep. When she joined the crew of the Wayfarer, an intergalactic ship, she got more than she bargained for—and learned to live with, and love, her rag-tag collection of crewmates.

A Closed and Common Orbit is the stand-alone sequel to that beloved debut novel, and is perfect for fans of Firefly, Joss Whedon, Mass Effect, and Star Wars.

Read more about the