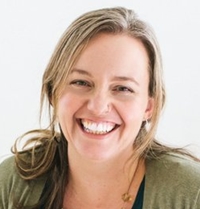 Tsh Oxenreider is the author of At Home in the World, a travel and research guide out in April 2017. Get more information about the author, her book as well as ratings and reviews on it. 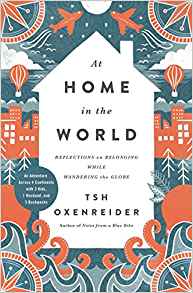 Tsh Oxenreider is the founder and main voice of The Art of Simple, a community site that celebrates living slow with passion, and is the host of the top-ranked podcast The Simple Show. She currently lives in Central Texas, near Austin, with her family.

Her other books are: Notes from a Blue Bike, One Bite at a Time, and Organized Simplicity.

Tsh and her vagabonding family once traveled around the world for a school year. Together, they love to travel and explore new cultures. Even if they currently live in Central Texas, several dots around the globe have also been called home. Besides, Tsh dreams of one day living in Stars Hollow. They also read books together, go camping together, and make homemade pizza for family movie night together. Tsh thinks a library card, a Netflix subscription, and a passport are some of the greatest parenting tools in the universe.

Her passion—besides writing, of course—is to create space in life for the stuff that matters, to make globally-minded choices, and to live unconventionally—and then help others do the same.

You can find her on her blog theartofsimple.net

As Tsh Oxenreider, author of Notes From a Blue Bike, chronicles her family’s adventure around the world—seeing, smelling, and tasting the widely varying cultures along the way—she discovers what it truly means to be at home.

The wide world is calling.
Americans Tsh and Kyle met and married in Kosovo. They lived as expats for most of a decade. They’ve been back in the States—now with three kids under ten—for four years, and while home is nice, they are filled with wanderlust and long to answer the call.

Why not? The kids are all old enough to carry their own backpacks but still young enough to be uprooted, so a trip—a nine-months-long trip—is planned.

At Home in the World follows their journey from China to New Zealand, Ethiopia to England, and more. They traverse bumpy roads, stand in awe before a waterfall that feels like the edge of the earth, and chase each other through three-foot-wide passageways in Venice. And all the while Tsh grapples with the concept of home, as she learns what it means to be lost—yet at home—in the world.

“In this candid, funny, thought-provoking account, Tsh shows that it’s possible to combine a love for adventure with a love for home.” —Gretchen Rubin, New York Times bestselling author of The Happiness Project and Better Than Before