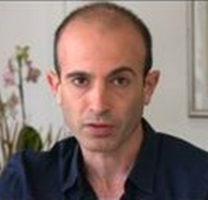 Yuval Noah Harari is a PhD israeli historian, profesor and writer born in Kiryat Ata in 1976. He is the author of Homo Deus: A Brief History of Tomorrow, an anthropology and history essay, translated from the 2015 original version in Hebrew in 2016 (published in Amazon in 2017). His bestseller Sapiens: A Brief History of Humankind has been translated into thirty languages. 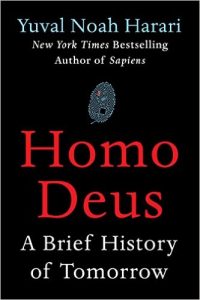 Yuval Noah Harari grew up in an old jewish family of east Europe native from Haifa, Israel. Holder of a Doctor’s degree in History from Oxford University, he first specialized in medieval history and military history, then in World History and the macro-historical processes. He currently teaches at the Hebrew University of Jerusalem.

His books include Special Operations in the Age of Chivalry, 1100–1550, The Ultimate Experience: Battlefield Revelations and the Making of Modern War Culture, 1450–2000, The Concept of “Decisive Battles” in World History, and Armchairs, Coffee and Authority: Eye-witnesses and Flesh-witnesses Speak about War, 1100-2000.

Yuval Noah Harari was twice awarded the Polonsky Prize for Creativity and Originality, in 2009 and 2012. In 2011 he won the Society for Military History’s Moncado Award for outstanding articles in military history. One year later, in 2012, he was elected to the Young Israeli Academy of Sciences.

His book Sapiens. De animales a dioses was an international success with more than one million copies sold. In 2015 the book was selected by Mark Zuckerberg, the founder of Facebook, for his online book club. Mark invited his followers to read what he describes as “a big history narrative of human civilisation”.

Homo Deus: A Brief History of Tomorrow is an anthropology and history essay translated from the 2015 original version in Hebrew into English in 2016 (published in Amazon in 2017).

Yuval Noah Harari, author of the critically-acclaimed New York Times bestseller and international phenomenon Sapiens, returns with an equally original, compelling, and provocative book, turning his focus toward humanity’s future, and our quest to upgrade humans into gods.

Over the past century humankind has managed to do the impossible and rein in famine, plague, and war. This may seem hard to accept, but, as Harari explains in his trademark style—thorough, yet riveting—famine, plague and war have been transformed from incomprehensible and uncontrollable forces of nature into manageable challenges. For the first time ever, more people die from eating too much than from eating too little; more people die from old age than from infectious diseases; and more people commit suicide than are killed by soldiers, terrorists and criminals put together. The average American is a thousand times more likely to die from binging at McDonalds than from being blown up by Al Qaeda.

What then will replace famine, plague, and war at the top of the human agenda? As the self-made gods of planet earth, what destinies will we set ourselves, and which quests will we undertake? Homo Deus explores the projects, dreams and nightmares that will shape the twenty-first century—from overcoming death to creating artificial life. It asks the fundamental questions: Where do we go from here? And how will we protect this fragile world from our own destructive powers? This is the next stage of evolution. This is Homo Deus.

With the same insight and clarity that made Sapiens an international hit and a New York Times bestseller, Harari maps out our future.

For more information about the