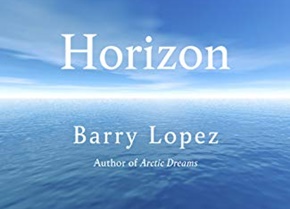 Horizon by Barry Lopez. Discover the synopsis, ratings and reviews, and learn more about this American author, essayist, and fiction writer.

Horizon by Barry Lopez. We are going to speak about the book, but before that, let’s learn a little more about the author.

Barry Holstun Lopez is the author of two collections of essays; several story collections; Arctic Dreams (1986), for which he received the National Book Award; Of Wolves and Men (1978), a National Book Award finalist, and Crow and Weasel, a novella-length fable. His work is known for its humanitarian and environmental concerns.

Barry Lopez is the recipient of fellowships from the Guggenheim, Lannan, and National Science Foundations and has been honored by a number of institutions for his literary, humanitarian, and environmental work (see award and prize list below).

Barry was born in 1945 in Port Chester, New York and raised in Southern California and New York City. He attended grade school at Our Lady of Grace (Encino), California, where the family lived. He studied at the University of Notre Dame, earning undergraduate and graduate degrees there in 1966 and 1968. He also attended New York University and the University of Oregon.

His writings began appearing in 1966. Until 1981, he was also a landscape photographer. He has travelled to nearly 80 countries to conduct research. Barry contributes regularly to both American and foreign journals and regularly collaborates with other artists and writers.

The author’s awards and prizes

Horizon is a non-fiction book, which was published in March 2019. Let’s take a closer look now at the book content. 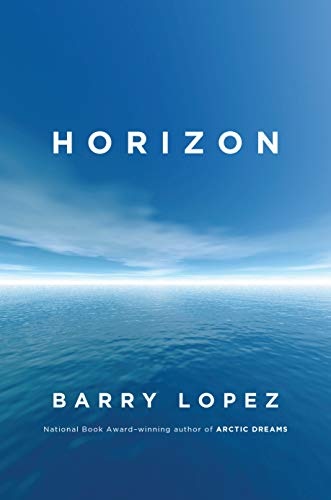 From the National Book Award-winning author of the now-classic Arctic Dreams, a vivid, poetic, capacious work that recollects the travels around the world and the encounters–human, animal, and natural–that have shaped an extraordinary life.

Taking us nearly from pole to pole–from modern megacities to some of the most remote regions on the earth–and across decades of lived experience, Barry Lopez, hailed by the Los Angeles Times Book Review as “one of our finest writers,” gives us his most far-ranging yet personal work to date, in a book that moves indelibly, immersively, through his travels to six regions of the world: from Western Oregon to the High Arctic; from the Galápagos to the Kenyan desert; from Botany Bay in Australia to finally, unforgettably, the ice shelves of Antarctica.
As he takes us on these myriad travels, Lopez also probes the long history of humanity’s quests and explorations, including the prehistoric peoples who trekked across Skraeling Island in northern Canada, the colonialists who plundered Central Africa, an enlightenment-era Englishman who sailed the Pacific, a Native American emissary who found his way into isolationist Japan, and today’s ecotourists in the tropics. Throughout his journeys–to some of the hottest, coldest, and most desolate places on the globe–and via friendships he forges along the way with scientists, archaeologists, artists and local residents, Lopez searches for meaning and purpose in a broken world.
Horizon is a revelatory, epic work that voices concern and frustration along with humanity and hope–a book that makes you see the world differently, and that is the crowning achievement by one of America’s great thinkers and most humane voices.

Review (some among many)

“At once reverie and urgent appeal, Horizon is beautiful and brutal—a story of the universal human condition, set in some of the most distinctive places on earth. Lopez [searches] both memory and meticulously recorded field notes, mining accumulated wisdom, seeking glimmers of hope. One of the strongest messages in Horizon is that without learning to embrace diversity, without listening to the tales told by cultures other than our own, we risk obliteration. Lopez’s reverence for exploring every corner of the world is infectious, [and] his knack for making friends in the most unlikely places resonates long after you turn the last page. ‘Are we not bound,’ he asks, ‘to learn how to speak with each other?’” —The New York Times Book Review
“Beautifully composed [with] steady intellectual rigor—a capacious blend of popular science, travel writing and autobiography. There is no discernable limit to Lopez’s curiosity: he writes with equal enthusiasm about human origins, the search for the edge of the expanding universe, classical music, arctic archaeology, Impressionist painting and Aboriginal rock art. He is at his best writing about natural history, where his scrupulous research and talent for lucid exposition make the business of scientific fieldwork come alive. The book is rendered with gorgeous prose, and spiked with humor . . . Extraordinary.”—The Wall Street Journal
“Literary journalism, memoir and travelogue: so compelling it deserves its own genre.” —The Washington Post