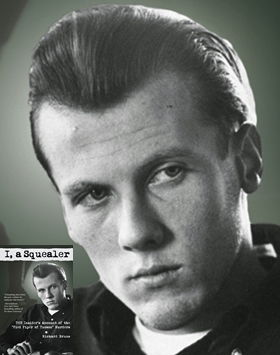 Spread the love
4.91 (55 votes)
Richard Bruns is the author of I, a Squealer, a non-fiction book published in March 2018. Learn more about the author, his book, as well as ratings and reviews on the latter. 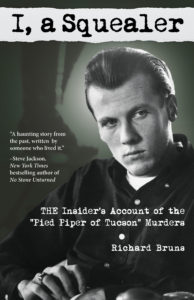 Richard Bruns is the man who turned Charles Howard Schmid Jr. aka “The Pied Piper of Tucson” into the authorities and was the star witness for the prosecution in the cases against Schmid.

He wrote his firsthand account at the time of the trials in 1966 through 1967. Once finished, he packed the manuscript away like a time-capsule. He was ready to close this chapter of his life.

Fifty years later, his daughter’s have uncovered the manuscript and have convinced him to release his side of the story.

Bruns is a retired teacher and continues to reside in Tucson, Arizona.

In November 1965 Charles Schmid, nicknamed the “Pied Piper of Tucson” by Life magazine, was arrested for the murders of three teenage girls. It was Schmid’s friend and confidant, Richard Bruns, who blew the whistle that resulted in Schmid’s arrest and conviction. After months of keeping Schmid’s secrets and fearing his friend’s psychopathic tendencies, Bruns finally came forward to the authorities.

Two trials would follow, resulting in a death sentence for Schmid for the murders of sisters Gretchen and Wendy Fritz, and a life sentence for the murder of fifteen-year-old Alleen Rowe. As the trials unfolded, Bruns documented his firsthand account in a written manuscript. Once finished, he packed the manuscript away like a time-capsule. He was ready to close this chapter of his life.

Now, fifty years later, the manuscript has been uncovered and is being published for the first time. This isn’t a book of memories distorted after years of passing. Rather, this was written in 1967 when the events were fresh and vivid in Bruns’ mind. Several books have shared the Charles Schmid murder cases, but none have been from an insider. Here, Bruns takes you into the scenes and events from a view never seen or heard before.

Reader’s Favorite gives I, a Squealer 5-Stars: A fascinating and disturbing account of Bruns’ friendship with, and ultimate betrayal of, serial killer Charles Schmid. It also includes police photos and newspaper clippings during and after the trial, and has received plenty of praise. This is not without reason. It is a gripping tale told in a straightforward manner and personable voice. -K M Steele

5-Star review from Foreword Reviews: Richard Bruns’ “I, a Squealer” promises and insider’s account of the “Pied Piper of Tucson” murders. As intriguing as this narrative is, the more compelling story lurks within the relationship between the “Squealer” and the “Pied Piper.” Published fifty years after it was written, this tale is fueled no less by its teller’s compassion than by the killer’s deplorable deeds. -Linda Thorlakson

Publisher’s Weekly compares I, a Squealer to John Gilmore’s Coldblooded

For more information about I, a Squealer visit: