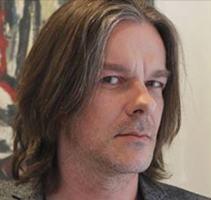 Sylvain Neuvel is a Canadian linguist, translator and author of science fiction novels, one of them is Sleeping Giants (2016). Sylvain Neuvel was born in Quebec City. He got a B.A. in linguistics from the Université de Montréal in 1999 and received a Ph.D. in Linguistics from the University of Chicago in 2003. He is currently Director of translation services and a software engineer for a Montreal company. 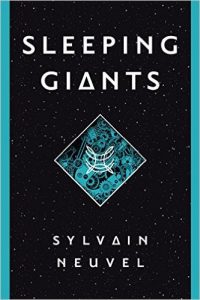 Sylvain Neuvel was raised in a small Quebec town called L’Ancienne-Lorette. He has a son, Théodore, of whom he is very proud.

He has taught linguistics in India, and worked as a software engineer in Montreal. He is also a certified translator, though he wishes he were an astronaut.

His personal interests include robotics as well as science-fiction in all shapes and sizes. He likes to tinker and dabble in robotics. He absolutely loves toys; his girlfriend would have him believe that he has too many, so he writes about aliens and giant robots as a blatant excuse to build action figures (for his son, of course). He is currently building a working Star-Wars interactive robot R2-D2 replica.

Sleeping Giants (2016) revolves around a secret project to assemble the ancient body parts of a giant humanoid relic buried throughout the world by aliens.

A page-turning debut in the tradition of Michael Crichton, World War Z, and The Martian, Sleeping Giants is a thriller fueled by an earthshaking mystery—and a fight to control a gargantuan power.

A girl named Rose is riding her new bike near her home in Deadwood, South Dakota, when she falls through the earth. She wakes up at the bottom of a square hole, its walls glowing with intricate carvings. But the firemen who come to save her peer down upon something even stranger: a little girl in the palm of a giant metal hand.

But some can never stop searching for answers.

Rose Franklin is now a highly trained physicist leading a top secret team to crack the hand’s code. And along with her colleagues, she is being interviewed by a nameless interrogator whose power and purview are as enigmatic as the provenance of the relic. What’s clear is that Rose and her compatriots are on the edge of unraveling history’s most perplexing discovery—and figuring out what it portends for humanity. But once the pieces of the puzzle are in place, will the result prove to be an instrument of lasting peace or a weapon of mass destruction?

For more information about