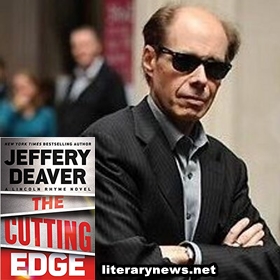 Jeffery Deaver is the author of The Cutting Edge (A Lincoln Rhyme Novel), out in April 2018. His books are sold in 150 countries and translated into 25 languages. Learn more about the author, his book, as well as ratings and reviews on the latter. 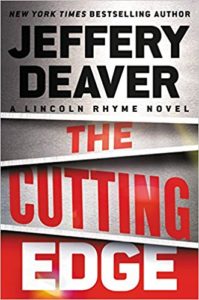 Jeffery Deaver is the #1 international bestselling author of more than thirty novels, three collections of short stories, and a nonfiction law book. His first novel featuring Lincoln Rhyme, The Bone Collector, was made into a major motion picture starring Denzel Washington and Angelina Jolie. He’s received or been shortlisted for a number of awards around the world.

A former journalist, folksinger, and attorney, Jeffery was born in Glen Ellyn, near Chicago, in 1950. He has a bachelor of journalism degree from the University of Missouri and a law degree from Fordham University.

His most recent Lincoln Rhyme novels are The Steel Kiss, The Burial Hour and The Cutting Edge.

Lincoln Rhyme and Amelia Sachs return to New York City to confront a killer terrorizing couples at their happiest–and most vulnerable.In the early hours of a quiet, weekend morning in Manhattan’s Diamond District, a brutal triple murder shocks the city. Lincoln Rhyme and Amelia Sachs quickly take the case. Curiously, the killer has left behind a half-million dollars’ worth of gems at the murder scene, a jewelry store on 47th street. As more crimes follow, it becomes clear that the killer’s target is not gems, but engaged couples themselves.

The Promisor vows to take the lives of men and women during their most precious moments–midway through the purchase of an engagement ring, after a meeting with a wedding planner, trying on the perfect gown for a day that will never come. The Promisor arrives silently, armed with knife or gun, and a time of bliss is transformed, in an instant, to one of horror.

Soon the Promiser makes a dangerous mistake: leaving behind an innocent witness, Vimal Lahori, a talented young diamond cutter, who can help Rhyme and Sachs blow the lid off the case. They must track down Vimal before the killer can correct his fatal error. Then disaster strikes, threatening to tear apart the very fabric of the city–and providing the perfect cover for the killer to slip through the cracks.