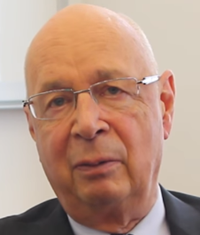 Klaus Schwab (born in Ravensburg in 1938) is a German ingineer and economist. He published The Fourth Industrial Revolution in January 2017. Professor Klaus Schwab is the Founder and Executive Chairman of the World Economic Forum, the International Organization for Public Private Cooperation headquartered in Geneva, Switzerland, employing more than 600 people. 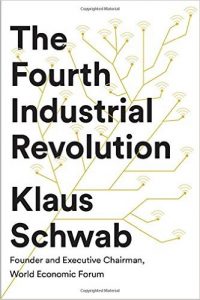 He founded the Forum in 1971, the activities of which are shaped by a unique institutional culture founded on stakeholder theory, a concept that he pioneered. Since then, the Forum has become the world’s foremost platform for public and private cooperation with headquarters in Geneva, Switzerland, and additional offices in New York, Beijing and Tokyo. The following year, in 1972, he became one of the youngest professors on the faculty of the University of Geneva.

In 1998, with his wife Hilde, he created the Schwab Foundation for Social Entrepreneurship. Six years later, in 2004, he was awarded the Dan David Prize for the Present Time Dimension in the field of Leadership: Changing Our World, for his role in. With the financial contribution received as part of the Dan David Prize, he established a new foundation: the Forum of Young Global Leaders (for leaders under 40). In 2011 he created the Global Shapers Community (for potential leaders between the ages of 20 and 30). The aim of the two foundations is to integrate young people as a strong voice for the future into global decision-making processes and to encourage their engagement in concrete projects that address social problems.

In 2016, he received the Bertelsmann Stiftung’s Reinhard Mohn Prize, an award granted to people who bring effective solutions to sociopolitical problems through innovative approaches.

Klaus Schwab has encouraged the establishment of communities providing global expertise and knowledge for problem-solving. Among them is the Network of Global Agenda Councils, comprising more than 1,500 of the most relevant experts related to global, regional and industry challenges.

We are on the brink of the Fourth Industrial Revolution. And this one will be unlike any other in human history.

Characterized by new technologies fusing the physical, digital and biological worlds, the Fourth Industrial Revolution will impact all disciplines, economies and industries – and it will do so at an unprecedented rate. World Economic Forum data predicts that by 2025 we will see: commercial use of nanomaterials 200 times stronger than steel and a million times thinner than human hair; the first transplant of a 3D-printed liver; 10% of all cars on US roads being driverless; and much more besides.

In The Fourth Industrial Revolution, Schwab outlines the key technologies driving this revolution, discusses the major impacts on governments, businesses, civil society and individuals, and offers bold ideas for what can be done to shape a better future for all.