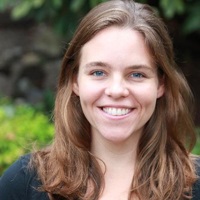 Alexandra Oliva was raised in upstate New York. The Last One is her first novel (July 2016), a novel halfway between fiction and science fiction. She has a BA in history from Yale University and an MFA in creative writing from The New School. Since 2014, she has lived in the Pacific Northwest with her husband and her puppy. 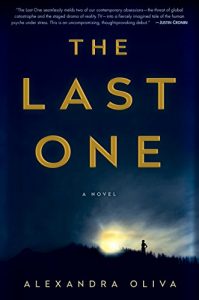 In 2001, Alexandra left the Adirondacks for Yale University where she made some of the best friends of her life, failed to learn Russian, and wrote a very long essay about Robin Hood, which earned her a B.A. in History.

After Yale, she moved to Ireland to write, travel, and wait tables. When her work permit ran out, she briefly returned to her hometown before moving on to New York City.

In New York, Ali waited more tables, worked as a private tutor, met her husband online, learned to rock climb, and received an M.F.A. in Creative Writing from The New School. She also volunteered The Prospect Park Zoo, where she particularly enjoyed narrating the Friday morning sea lion feedings to visitors and getting to hold bearded dragons.

Before The Last One, she wrote two “practice novels”, as she considers them.

To pull off The Last One she decided to undergo a fourteen-day field course with the Boulder Outdoor Survival School (B.O.S.S.) in Utah, which is known for providing some of the most authentic and challenging wilderness survival and primitive living experiences in the world. It was a difficult and amazing experience, which was extraordinarily helpful to writing the book.

The Last One is a novel halfway between fiction and science fiction. Sophisticated and provocative, it is a novel that forces us to confront the role that media plays in our perception of what is real: how readily we cast our judgments, how easily we are manipulated.

Survival is the name of the game as the line blurs between reality TV and reality itself in Alexandra Oliva’s fast-paced novel of suspense.

She wanted an adventure. She never imagined it would go this far.

It begins with a reality TV show. Twelve contestants are sent into the woods to face challenges that will test the limits of their endurance. While they are out there, something terrible happens—but how widespread is the destruction, and has it occurred naturally or is it man-made? Cut off from society, the contestants know nothing of it. When one of them—a young woman the show’s producers call Zoo—stumbles across the devastation, she can imagine only that it is part of the game.

Alone and disoriented, Zoo is heavy with doubt regarding the life—and husband—she left behind, but she refuses to quit. Staggering countless miles across unfamiliar territory, Zoo must summon all her survival skills—and learn new ones as she goes.

But as her emotional and physical reserves dwindle, she grasps that the real world might have been altered in terrifying ways—and her ability to parse the charade will be either her triumph or her undoing.

For more information on