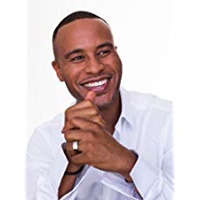 DeVon Franklin is a Hollywood producer, bestselling author and spiritual success coach. The Truth About Men: What Men and Women Need to Know went out in 2019. Learn more about the author and his book, as well as ratings and reviews on the latter.

DeVon Franklin is an award-winning Hollywood producer and a leading spokesperson on faith and personal development. He is the CEO of Franklin Entertainment, a production company in conjunction with 20th Century Fox, and the producer of the box office hit Miracles from Heaven and the animated film, The Star. Variety named him one of the “10 Producers to Watch” and Beliefnet called him one of the “Most Influential Christians Under 40.” DeVon is also the co-host of the TLC event series, This Is Life Live. In a few words, he is a media multi-hyphenate committed to uplifting the masses through entertainment.

A graduate of the University of Southern California, DeVon is the co-author of the New York Times bestseller, The Wait, written with his wife, Meagan Good, an award-winning actress, and Produced By Faith.

Let’s take a closer look now at today’s title, The Truth About Men: What Men and Women Need to Know, published in February 2019.

New York Times bestselling author and Hollywood producer DeVon Franklin speaks out frankly and openly about why men behave the way they do and what everyone—men and women alike—need to know about it.

We hear it all the time. Men cheat. Men love power. Men love sex. Men are greedy. Men are dogs. But is this the truth about men?

In this groundbreaking book, DeVon Franklin dishes the real Truth About Men by making the compelling case that men aren’t dogs but all men share the same struggle. He uses the metaphor of a dog that needs training as a way to explore why behavior persists in men that can lead them to act against their vows, their integrity and even their character.

DeVon provides the manual for how men can change, both on a personal and a societal level by providing practical solutions for helping men learn how to resist temptation, how to practice self-control and how to love. He argues the same discipline that drives men in their professional lives needs to be applied to their private lives. DeVon is also transparent about the challenges he faces daily as he endeavors to “Master the Dog” within.

But The Truth About Men isn’t just for men. DeVon tells female readers everything they need to know about men. He offers women a real-time understanding of how men’s struggle effects them, insights that can help them navigate their relationships with men and information on how to heal from the damage that some misbehaving men may have inflicted.

This book is a raw, informative, and compelling look at an issue that threatens to tear our society apart yet it offers a positive way forward for men and women alike.

More information about the