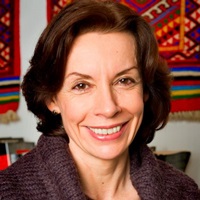 Michelle Paver was born in Nyasaland (now Malawi), central Africa, in 1960 and grew up in England. She published Thin Air in October 2016, a mystery, suspense and supernatural thriller. She is wellknown for her series of books Chronicles of Ancient Darkness, the sixth and last one of which, Ghost Hunter (2009), won the 2010 Guardian Prize. 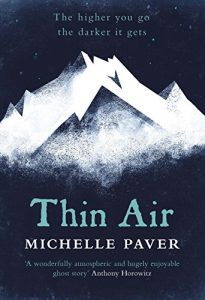 After graduating from Oxford University in biochemistry, Michelle Paver became a partner in a City of London law firm but finally chose to dedicate herself to writing.

Her first book Without Charity was published in 2000. Her 2010 ghost novel Dark Matter was nominated for a Shirley Jackson Award for best novel.

The Series Chronicles of Ancient Darkness is comprised of 6 books set in prehistoric Europe during the New Stone Age. The first book, Wolf Brother, was published in 2004 and the last one, Ghost Hunter, in 2009. As a whole, the books have sold over 1 million copies in the UK. This series came from Michelle’s lifelong passions for animals, anthropology, and the distant past, as well as an encounter with a large bear in a remote valley in Southern California. To research the books, Michelle has traveled to Finland, Greenland, Sweden, Norway, Arctic Canada, and the Carpathian Mountains. She has slept on reindeer skins, swum with wild killer whales, and gotten nose to nose with polar bears and wolves. The first four books have been made into widely acclaimed audiobooks, read by Ian McKellen.

Thin Air is a mystery, suspense and supernatural thriller published in October 2016.

Chosen for Simon Mayo’s Radio 2 Book Club, this is the chilling new ghost story from the bestselling author of Dark Matter.

Kangchenjunga. Third-highest peak on earth. Greatest killer of them all.

Five Englishmen set of from Darjeeling, determined to conquer the sacred summit. But courage can only take them so far – and the mountain is not their only foe.

As the wind dies, the dread grows. Mountain sickness. The horrors of extreme altitude. A past that will not stay buried.

And sometimes, the truth does not set you free.

Get more detail about